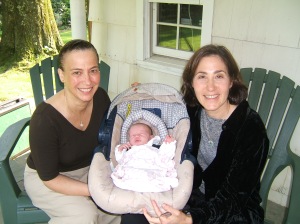 My adoption attorneys Nina Rumbold and Denise Seidelman were excited to meet my daughter once we were home!

Other than adoptive parents and birth mothers, there’s no more important figure in this process of family building than the adoption attorney. To get that perspective on the role of online communication tools, I sent a Qualtrics survey to 350 members of The American Academy of Adoption Attorneys, also known as quad A Adoption Attorneys. These attorneys were invited to participate via email through the creation of a Qualtrics panel. Members of the American Academy of Adoption Attorneys maintain their practices according to the highest ethical standards of ethics, competence and professionalism and are considered to be the best adoption attorneys in North America. The survey was launch on April 11, 2014 and closed on 11:59 PM on April 20, 2014. I received 39 responses to the survey for an 11.14% return rate. Here is a copy of the Qualtrics survey the attorneys were asked to complete.

The survey was anonymous, so names of participants are unknown. The attorneys who responded were from a variety of states within the U.S. and most had many years of experience in domestic adoption.

The first question that I asked was, “Do you believe the Internet and social media have changed adoption in the last five years?” 97% of the respondents said yes, with only one of the 37 who responded saying no.

The next question was, “Do you recommend that your clients advertise in print in hopes of matching with expectant parents considering an adoption plan for their unborn baby?” The response was almost evenly split. Of the 36 attorneys who answered this question, 17 said yes (47%) and 19 said no (53%). I find this very intriguing, and was surprised that almost half the respondents still advise their clients to advertise in print. This says to me that in the opinion of the legal community, print is still a viable way to match with expectant parents. Advertising in print can get expensive, but may reach a different demographic, one that doesn’t have access to the Internet or technology. This web page, has some good advice for advertising for domestic adoption opportunities. The last tip also advises the reader that print advertising is not dead.

My next question was, “When advising your clients about the Internet to increase their outreach, what methods do you suggest they use?” The respondents could select all they felt that were applicable. Below is a table showing the responses from highest percentage to lowest. It’s not surprising that creating an adoption website and signing up to be part of other online adoption sites ranks among the highest, while using Twitter and Search Engine Optimization (SEO) ranked much lower. Click on the graphic below to enlarge it.

The graphic above indicates that 39% responded “Other”. Among the write-in responses for this choice were some comments about the use of advertising in particular states as well as some other forms of communication like general networking by postal mail, email and Internet and word of mouth.

The next question about recommending a monthly advertising budget yielded a variety of responses, but many responding attorneys indicated that it was up to the individual family to decide how much to spend on outreach.

The next question was, “Where are your clients receiving the MOST contacts regarding potential situations?” Each respondent could only choose one response. Networking yielded the most responses, while print ads yielded the least. Keep in mind that print ads are not allowed in some states and the attorneys that responded are only a sample of those who practice throughout the United States. See the chart below for the ranking of all possible responses. Click on the chart to enlarge it.

Question number eight asked the respondents to rank the order in which their clients are receiving contacts regarding potential situations. Networking ranked as number one, followed by Internet/social media. Coming in third was “other”, which consisted of adoption agencies or adoption attorneys presenting situations to clients. In last place were print ads.

In my final question, I asked the attorneys to write about any trends they are seeing in private domestic adoption. I received some great responses. Here are three quotes that I found quite interesting.

“It is important to maintain privacy for both the birth parents and the adoptive parents. Social media is a great way to begin, however, certain safety measures need to be in place. For example, independent legal representation for birth parents and verification of birth mothers’ motivation. Without professional oversight, there is a great deal of room for abuse and fraud.”

“Social Media makes the adopting couple (or single parent) get the word out that they are a potential parent. This method must be filtered somewhat due to the amount of fraud that can take place in adoption, i.e. false pregnancies, etc. In addition to the social media, there must be connection and collaboration with the attorney to insure that the potential birth mother is legitimate. Adding these safeguards initially will assist the Adoptive parent in securing a reliable birth mother.”

“Yellow pages were the ‘gold standard’ for birth parents to find an agency or attorney 25 years ago. Free ‘penny papers’ at the supermarket or distributed elsewhere worked fairly well up to about 5 years ago. Now with nearly everyone connected via a computer or smart phone, the internet has become the predominant means to match.”

Here is a link to the entire report on this survey. I hope that you will read it and find the feedback useful. There is no definitive answer to the mystery of matching with an adoption situation, but here some of the top adoption attorneys in the country have given us a bit of insight, based on their many years of adoption experience.